Originally from Sweden, Gustaf attended an International Baccalaureat high school and was weighing his options for university. Wanting to continue his studies in English, he found it complicated to go to university in the UK due to Brexit. Because his father had ties to Luxembourg, he searched online where he found UBI Business School. After applying, speaking with the dean, and receiving an offer, he decided to join because he felt UBI would provide him a unique experience.

Gustaf’s long-term career plans include going into the family’s biotech business. Labio AS was founded in the Prague in 1990 and was taken over by Gustaf’s father in 2007. The company provided a backdrop to Gustaf’s childhood including factory visits and business trips with his father. He even did an internship in the company as part of his IB programme. His older brother went into logistics and works with the company in the shipping port of Gottenberg. Gustaf has gravitated more to the accounting and management side of business and hopes to add his expertise to the company someday.

Gustaf wants to be part of the family company because he knows their product can make a difference in the world. Labio AS is perfecting an exciting technology that can be used across industries. The technology combines UV spectrometry with gas chromatographs to detect hazardous gases and toxins in a non-invasive way, thus making it much less expensive than traditional chemical analysis. Of course, this product can be used in the medical field to predict possible cancer or the onset of diabetes. But it can also be used in other sectors such as shipping, where it would allow officials to easily inspect shipping containers for certain hazardous or illegal contents. Gustaf sees the value of this product and looks forward to helping it gain a wider usage. 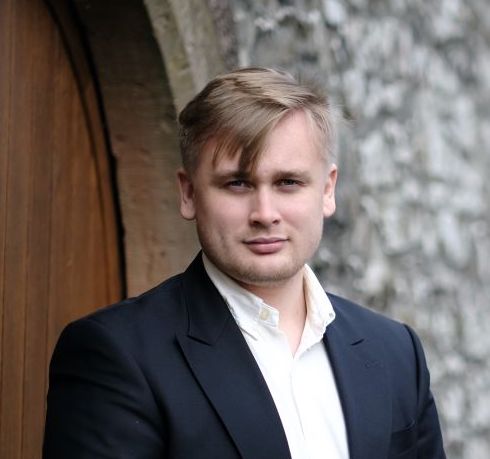 I genuinely have a concern for other people and want to have a positive impact on society."

In preparation for working in the company someday, Gustaf is taking advantage of his time at UBI to acquire a good foundation in all elements of business. Studying among such an international student body has given Gustaf opportunities to work with different types of people and to understand how culture and language play a role in people’s working habits and communication styles. The small class size and familiar environment has allowed Gustaf to be more extroverted and take the lead in many discussions and projects. He hasn’t just learned about different leadership styles in his people management class, or communication styles in his intercultural communication class, or persuasion in his academic writing class. Rather, he has put these concepts into practice in a very hands-on way and learned by doing.

Gustaf is looking forward to his final year at UBI and has already begun his search for his third-year internship placement for next spring. While his long-term plans are to go into the family business, he is open to shorter-term opportunities for professional experience and personal growth. He would consider working in a bank in Luxembourg, or even being a hybrid entrepreneur. Whatever direction his future takes, Gustaf is sure to be a leader among his peers.